Zen master Thich Nhat Hanh, who’s visiting the Google campus this month, says we need to foster aimlessness rather than seeking to be number one. Photograph: David M. Nelson

Why on earth are many of the world’s most powerful technology companies, including Google, showing a special interest in an 87-year-old Vietnamese Zen Buddhist monk?

The answer is that all of them are interested in understanding how the teachings of  Thich Nhat Hanh, or Thay as he is known to his hundreds of thousands of followers around the world, can help their organisations to become more compassionate and effective.

In a sign that the practice of mindfulness is entering the mainstream, Thay has been invited later this month to run a full day’s training session at Google’s main campus in California.

Thay, who has sold over 2m books in America alone, is also meeting more than 20 CEOs of other major US-based technology companies in Silicon Valley, to offer his wisdom on the art of living in the present moment.

He plans to discuss with them how they can develop a deep understanding of the inter-connectedness and inter-dependence of all life and offer practical tools to better integrate mindfulness in their daily work, in the products they design, and in the vision they have for how technology can change the world. The event will end with the practice of walking meditation.

The work of Thay has been acknowledged by several global leaders over the past 50 years. Current World Bank president Jim Yong Kim  has said his practice is one “in which one can be deeply passionate and compassionate toward those who are suffering,” while Martin Luther King nominated him for the  Nobel peace prize in 1967 for his work in seeking to end the Vietnam war.

King said that conferring the award “would re-awaken men to the teaching of beauty and love found in peace. It would help to revive hopes for a new order of justice and harmony.”

Despite his advancing years, Thay, who was ordained 71 years ago, is currently in the middle of a punishing three month tour of North America, immediately after a similar period running retreats across Asia.

His network of monks and nuns represents the world’s fastest growing monastic order and his week-long retreats in upstate Toronto, New York, Mississippi and California, each with a capacity of more than 1,000 people, have sold out in a matter of days.

Thay, who warns that civilisation is at risk of collapse from the environmental and social damage caused by the voraciousness of our economic system, offers an alternative vision that focuses on true happiness, which he believes we have sacrificed on the altar of materialism.

His teaching is based on transforming our suffering by letting go of the scars of the past as well as worries about the future, via meditation and mindful living.

Pointing to our addiction to consumption as a clear sign we are trying to paper over our suffering, Thay suggests we should go in the opposite direction, to the very heart of our pain, in order to transcend it.

He believes that for business to play a role in slowing the runaway train of capitalism, corporate leaders need to recognise they have made a fundamental error in their narrow-minded belief that profit on its own equates to success.

For that to happen, the corporate world needs to undergo a fundamental shift in consciousness by recognising the importance of integrating spiritual principles into its daily life.

In an interview with the Guardian at the end of his retreat last week in the Catskill Mountains on the art of suffering, Thay said: “You have to consider your idea of happiness. You think it is possible only if you win, if you are on the top.

“But it is not necessarily like that, because even if you are successful in making more money, you still suffer. You compete because you’re not happy and meditation can help you to suffer less.

“Many of us think you can only be happy when you leave other people behind; you are number one. You do not need to be number one to be happy.

“There must be a spiritual dimension in your life and in your business, otherwise you cannot deal with the suffering caused by your work or your daily life.” 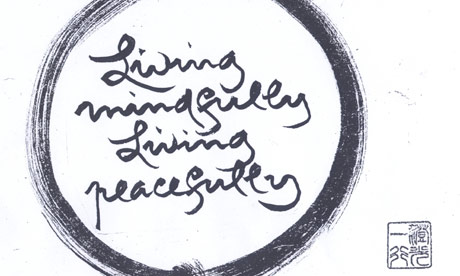 Recalling his meetings with King, which were pivotal in the the decison of the civil rights leader to come out against the Vietnam war, Thay said President Obama missed out a key ingredient when he last week celebrated the 50th anniversary of the landmark ‘I have a dream’ speech.

Central to King’s vision was the development of the Beloved Community and Thay has concentrated his energy on building more than a thousand ‘sanghas’ of lay practitioners around the world.“When President Obama said let freedom ring, he is talking about the kind of freedom coming from outside; political and social freedom, but even if you have a lot of freedom to organise, to say things, to write, you can still suffer a lot as you don’t have the freedom inside â€“ from your anger and fear,” says Thay.

But is it possible for business leaders to create transformation through the building of a community ethos within their companies?

Mindfulness and meditation in the workplace

Thay believes that bringing mindfulness and meditation into corporations will help them to turn away from their destructive ways and recognise the inter-dependence of all life.

“Meditation practice can help business to suffer less,” he says. “That is good already because if your employees are happy, your business can improve.

“If your business is causing environmental problems, then because you have practiced meditation you may have an idea of how to conduct your business in such a way that you will harm nature less.

“Meditation can calm your suffering and give you more insight and more right view on yourself and on the world and if you have a collective wisdom, then naturally you will want to handle and conduct your business in such a way that will make the world suffer less.”

Bringing mindfulness into the workplace can also help prevent employees from becoming overwhelmed by their work, according to Thay, but business leaders need to lead by example.

Business leaders need to take care of themselves

While many senior executives are starting to speak out about the importance of sustainability, Thay says few connect this to the internal culture of the organisations they run.

“If he [business leader] spends all the time taking care of the corporation, he does not have time for himself or his family, but it is important to recognise that the business will profit if he is more calm, more loving, more compassionate and understanding,” he says.

Partly to blame is the increasing speed and reach of computers, which makes it increasingly hard to find time to reflect and be inspired.

The power of aimlessness

Thay talks of the importance of developing the art of aimlessness, rather than the non-stop creation of more projects.

“People believe that happiness is in the future and the point of aimlessness is to stop running and find happiness in the here and the now,” he says.

“True happiness cannot be without peace. If you continue to run, how can you have peace and you run in your dreams also. That is our civilisation. 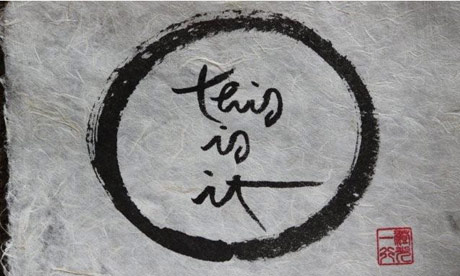 “We have to reverse this trend. We have to go back to ourselves, to our beloved ones, to nature, because electronic devices help us to run away from ourselves. We lose ourselves in the internet, business, projects and we have no time to be with ourselves. We do not have the time to take care of our beloved ones and do not allow Mother Earth to heal us. We are running away from self, family and nature.”

Erin Callan, the former chief financial officer of Lehman Brothers, who resigned months before the bank’s bankruptcy, put her head above the parapet earlier this year to write about how work had completely consumed her.While most business leaders find it difficult to talk openly about the pressures they face, there are high profile examples of executives who share Thay’s concerns.

“When I left my job, it devastated me,” she wrote in the New York Times. “I couldn’t just rally and move on. I did not know how to value who I was versus what I did.

“When I wasn’t catching up on work, I spent my weekends recharging my batteries for the coming week. Work always came first, before my family, friends and marriage â€” which ended just a few years later.”

While Thay worries about the destructive force of technology, he recognises its dualistic nature and therefore its power also to do good.

This is why he will call on the technology CEOs he meets to concentrate on developing apps and other devices that can help bring people back into balance.

“We need to have an awakening and when I talk to Google and the other companies, I will tell them to use their intelligence and goodwill to help us create the kind of instruments to come back to ourselves, heal ourselves,” he says. “We do not have to reject or throw away all these devices but can make good use of them.”

He talks of developing apps that can help people to calm their anger when it arises and refers to a watch he designed, on which every hour is marked by the word ‘now,’ rather than a number.

Google has asked the Buddhist monk to talk on the subject of intention, innovation and insight, which he says can all benefit from the practice of mindfulness.

Thay was invited to visit Google in 2011 and since then mindfulness practices have blossomed at the technology giant, including a growing number of people taking part in its formal mindfulness training programme, ‘Search Inside Yourself.’ Meditation rooms have also been created within many of the company’s offices.

He says: “Staff at Google want to know how to transform their suffering just like all other living beings.

“Many of them are very young and intelligent so they can understand the teaching and practice well and can spread this and they have the means to do that.

“It will help for them to know that everyone has the wish to do good because all of us have Buddha nature. When you look at the path which is not noble, you can see the other path. So looking into suffering you see the way of happiness; that is the teaching of the four noble truths and you do not need to be Buddhist to understand that.

“Our society needs a collective awakening in order to save ourselves from the crisis we are in. So the practice is that awakening should take place in every step, every breath. And if you have awakening you know you have a path of happiness. You stop suffering and then you can help other people to do the same.”

A Mindful Beginning To The New Year – Silent Retreat